Before you go and get started on this project of a sandwich, let me warn you… it takes some time. Completely worth it in the end. I prefer to make this when I already have left over fried eggplant from the day before. But if you’re in the mood for a delicious, hearty, warm and gooey sandwich, and you’ve got some time to spare…this one’s for you! I am going to give you all the yummy layers to this satisfying Sammy, get ready for a treat.

I like to keep this roasted mini sweet pepper and garlic spread on hand. Not only is it super easy to make and store, it goes great on a lot of things! Pasta’s, sandwiches, and even stuffed into  chicken!

To make: Buy a bag of mini sweet peppers and a whole head of garlic. Remove seeds and stems from peppers and cut them in half. Place your chopped peppers along with 4-5 big garlic cloves on a baking sheet, drizzle some olive oil and sea salt of the top and bake at 400 degrees until golden.

Let it cool and blend in a small food processor. Store in glass jar in your refrigerator for up to two months.

Fried eggplant is one of my favorite snacks. Eggplant is a staple in my kitchen. But I’ve shared this before. To bread my eggplant I give them an egg bath and dip them in a 2-3 ratio of parmesan cheese and bread crumbs. Add a pinch of salt to your dry mix. I like to bread all the eggplant prior to starting, this way I am not trying to do two things at once, causing me to burn them.
Fry on both sides until golden brown in some extra virgin olive oil.

Now to the good part, building this amazing sandwich for you to actually enjoy! I begin toasting my bread with fresh mozzarella on one slice, and my roasted sweet pepper and garlic spread on the other. Once my bread is toasted to buttery perfection I add some thinly sliced tomato, handful of spinach leaves, and of course your fried eggplant. Add as many of each as you want. You really can’t go wrong when making this sandwich.

I could eat this sandwich everyday, and not get sick of it. True story. 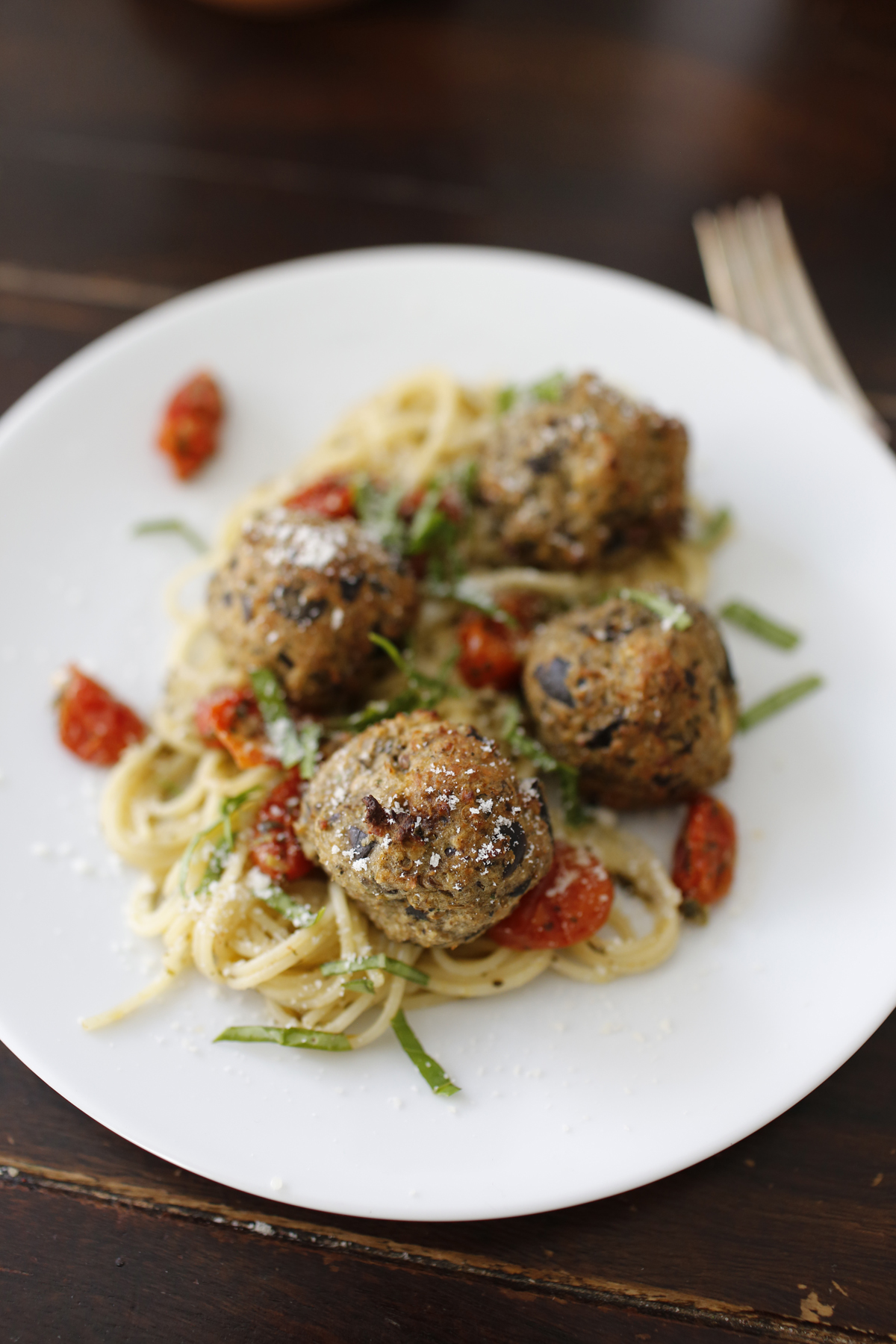 Eggplant is one of my favorite vegetables. There was a questionnaire going around on facebook not long ago, encouraging you to ask a series of questions to your children about their mother. One of those questions was “What’s mom’s favorite food”, and one of my kids lit up like an idea bulb and said, “I know, Eggplant”. It’s true, and if you follow me on social media, its a known fact. I have often posted pictures of eggplant dishes I have made, and I am always on the hunt for new ways to make it. In case you didn’t know, there are at least 14 varieties of Eggplant. There’s possibly more, those are the ones that I know of.

The American eggplant most commonly sold in grocery stores are one of the bitterest as well. Odd isn’t it? There are other types that I have grown (literally and figuratively) to love. Those include Thai eggplant and Chinese eggplant. I have also grown American and white eggplant in my garden. I found that I love the sweetness of white eggplant, but the skin is incredibly tough. This year my Chinese eggplant has really done well. A little too well, as I have this abundance of eggplant and sometimes we just don’t eat it fast enough. I’d give it away, but people don’t exactly line up for eggplant. (Ahem, if you are a local friend and you want some, let me know, I’ll share)

Today, like most days, I look down at my watch and realize I’m starving because I haven’t eaten anything all day and it’s already 2pm. And like most days, I go to the fridge hoping that magically something new has appeared and I will rejoice in its flavorful delights. That part never happens. But hey, I am ever so hopeful. Upon todays cold box wishing I sighed at the ugly eggplant that was starting to wilt because; a) I like my fridge icy cold, b) its been in there awhile. Still eatable, just doesn’t look as pretty as it does the day I pick it. I tend to pick them early when the plant is young. It helps the overall production of fruit.

I proceeded to do what most people do in this “what do I eat” madness…. I went to pinterest. My first thought was that I was going to make some sort of burger out of this sad looking eggplant. Then I stumbled across this eggplant meatball recipe by Skinny Taste, and well I was intrigued. As I started pulling things out to make it I realized I didn’t have everything this particular recipe called for, but don’t worry… I am full of ambition and made some minor life altering decisions. No body died so its good.

Let’s get started on what you’ll need.

Preheat your oven to 375 degrees.

Step 1. Dice your eggplant into small bite size pieces. Combine eggplant bites with olive oil, whole garlic cloves, 1 tsp garlic powder, 1 tbsp. of parsley flakes and mix. Take a cookie sheet and spray it with cooking spray. Then toss your bites onto the sheet. Place in your preheated oven and bake until tender, mine took about 20 minutes.

Step 2. While your bites are roasting in the oven, cook your quinoa per package directions. Its typically a 1:2 ratio, so for half a cup of quinoa you’ll need to boil 1 cup of water. I added a little butter to my quinoa, just out of habit I suppose.

Step 3. Once your bites are done you will need to chop them up in a food processor or blender. You don’t want them to become too mushy. So pulse them to keep them somewhat coarse. Using the same bowl you seasoned your eggplant bites, add the chopped up slightly mushy bites with the cooked quinoa, beaten egg and the remaining ingredients. Make sure everything is evenly mixed.

Step 4. Re-spray your cookie sheet and roll out your eggplant (meatless) meatballs into approximately 2 inches wide balls. Return to oven and bake for 30 minutes.

I wasn’t really sure how these were going to taste, but they were amazing! Amazeballs if you will. I plan to make these again and again. The originally recipe called for white beans and whole wheat bread crumbs. Since I used quinoa and almond flour instead, they had a bit of crunchy to them. I do plan to try it with bread crumbs and white beans. I almost used chick peas, but didn’t want to bother with shelling them. If you are a vegetarian you can of course omit the egg or substitute with flax seed.

I loved them. Also, they have been kid tested and kid approved. That’s a win in my book.

It’s Sunday. The start of a fresh new week. We’ve got 3 types of meat on the smoker. Chevon, beef, and Javelina. Like our meats, we’re taking it slow today too. Just going to be spending some time in the kitchen, one of my favorite spots in the house. Hope you all are enjoying your Sunday too!
Farm friend Friday! Here’s some of our barnyard friends! We added a few drakes and my new baby birds arrived yesterday! 🐣 Even though we have 9 more baby chics currently in our brooder, asked a farm friend recently to hatch some chicks for me, and I still ordered more laying hens. I have too many birds of the same egg laying color, I needed a better variety. That means if you’re interested in buying a tiny backyard flock, I will be selling a few sets of 3 or 5 in the summer. All current first year layers! Lemme know if this peaks your interest, I can even add in a tiny custom built coop. 👌🏻
Bread making has been the week theme. Baked yesterday, made Sunday. What do to do with this now. French toast, a cinnamon egg bake, toasted dipped in herbed oil? Endless options. Wednesday has me all over the field. But it’s the slow foods that really move me. When I get back to the landers in the food arena, I am so inspired to learn more old world traditions. Doing things old world gives me so much joy. Reminds me that real skills are not innate but learned and practiced. To be better we have to learn and practice to be better. I think I will take some eggs and this loaf to work for some fresh eggs for French toast. Share our goods.
Mondays, mama’s and mimosas. 🥂 Alright minus the mimosas, the rest is true. Mama Clover getting closer to kidding. She spends lots of time simply lounging. Seems to be annoyed at everything and never stops moo’ing at me for treats. I get it. Depending on how she does this could be her last season before retirement. But if she kids like a champ just like last year, I think we’ll give her another go. Who’s ready to see all the baby goat pics?
Today’s afternoon harvest. It may only be greens, but they’re homegrown greens. Most of today’s eggs have been gathered, and my son is out on an egg delivery. Few more garden shuffles from me this afternoon and then perhaps a nap.
Garden 2.0 is really shaping up to be great! And my kitty assassins struck again killing a field squirrel. Those were the main source of destruction my first year gardening here. I have been getting a great winter harvest of greens; 3 types of kale, rainbow chard, baby spinach, and a few types of lettuce. I also have some red cabbage and celery growing. Inside sprouts I have for spring are kohlrabi, cabbage, shishito peppers, and a few types of eggplant. Have to build another 3’x10’ bed before those are transplanted. Can’t wait for mid-late spring when I will have an abundance to can & ferment. Also plan to get our orchard started in the coming months. Now can I get some volunteers to start my vintage window greenhouse? I will start working on that on the weekends. Nothing makes me happier that getting projects finished.